Christmas has gone global as everyone traveling to different parts of the world during the Christmas season might know. In popular perception, Christmas is perceived of as a holiday primarily associated with the northern regions of the Western Hemisphere and their Christian history. We are usually unaware that Christmas celebrations experienced the first wave of globalization in the wake of Christian missionary movements and a second wave through globalized consumer capitalism and event cultures.

In the last decades, the tradition of German Christmas markets has been exported to various places around the world, including Singapore. Today, the decorations that create much of the atmosphere of our Christmas are “Made in China.” The figure most associated with Christmas today is the jolly Santa Claus, which was popularized and subsequently globalized through Coca-Cola advertisement from the 1930s onward, rather than the figure of Jesus Christ. Many lament the capitalist commodification of Christmas as an impoverishment of a once cherished tradition in which religious, social and filial lives were interwoven. A closer look at the relationship between Christmas, consumerism, and religion might be more intricate than a simple story of decline and impoverishment as the example from Christmas celebrations in Singapore will show.

Singapore, the tiny tropical island state in Southeast Asia, was listed by The Lonely Planet as one of the top 10 Christmas Market destinations of the world in 2011. Since 1988 the annual ‘Christmas Light Up’ at Orchard Road – Singapore’s premier shopping locale with malls, department, and flagship stores – marks the beginning of the end of year celebrations on the island.

Supported by private and public stakeholders, such as the Orchard Road Business Association and the Singapore Tourism Board, the ‘Christmas Light Up’ is drawing millions of shoppers and tourists to the location every year. Both non-religious organizations emphasize the secular and commercial character of the ‘Christmas Light-Up,’ viewing it as a means to promote the precinct and to create tourism and retail revenue rather than as a way of celebrating a religious holiday.

The apparent business intentions, the locality among consumer temples and the event character of ‘Christmas on Orchard Road’ could be read as an example in support of the thesis that Christmas is the first global consumption holiday. Even small local supermarkets on the eastern end of the island, far away from the buzzing downtown area and Singapore’s tourist attractions, play Christmas carols around the clock and features seasonal decorations starting early in November. It suggests that Christmas is not only enacted for the sake of the tourist business but is also an established season in the Singaporean festive calendar.

Christmas celebrations came to Singapore with missionaries and colonial administrators. In post-colonial times, Christians in Singapore celebrated Christmas mostly as part of their religious calendar, albeit not as a big public celebration. Christmas trees and decorations meant to attract Christmas shoppers were to be found in Singapore’s big department stores and the little shops in Chinatown as early as the 1930s. It was in the 1970s, however, that things in Singapore began to change, as they had done in other Asian countries in the post-World War II decades when Christmas was popularized by American TV and movie productions.

In the case of Singapore, the entrenchment of Christmas festivities in consumer culture opens a space for religious activities and representations within the public sphere, which would be quite impossible at other times. The small city-state with a total population of 5,53 million is characterized by great ethnic, cultural and religious diversity carefully managed by the state to avoid tensions and conflicts between different groups. Therefore, the Singaporean government circumscribes possibilities for festivities and religious celebrations in the public sphere.

“The Reason for the Season” – Spreading the Message of Christmas

Since 2004, a group of Christian organizations (CCIS, Celebrating Christmas in Singapore) has come together and gained permission to celebrate Christmas as a distinctly Christian festival on Orchard Road. With stage performances, dancing, singing Christmas carols, creative storytelling, and displays, they share “the reason for the season” and spread the message of Christmas while entertaining shoppers and passers-by. Aware of state regulations and sensitivity to the possibilities of tensions between different religious traditions, the Christian message is packaged in entertaining formats, and brochures on offer warn potential readers of their explicitly Christian content. 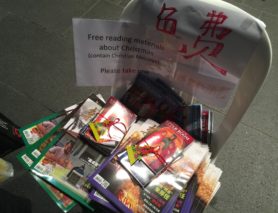 All in all, this creates a kind of win-win situation for all parties involved as it adds to the attraction of ‘Christmas on Orchard road,’ draws tourists and shoppers alike while giving Christians the opportunity to present their understanding of Christmas in the public space of Singapore’s signature lifestyle precinct. Here, the double-sided nature of Christmas as a secular, globalized, consumer-oriented holiday and a religious holiday with a distinctly religious message allows it to both create touristic and economic possibilities and offer legitimation for the presentation of a religious message in the public sphere.

Katja Rakow is assistant professor for religious studies at the department of Philosophy and Religious Studies at Utrecht University. She is especially interested in the intersection of religious practices, popular culture and consumerism.